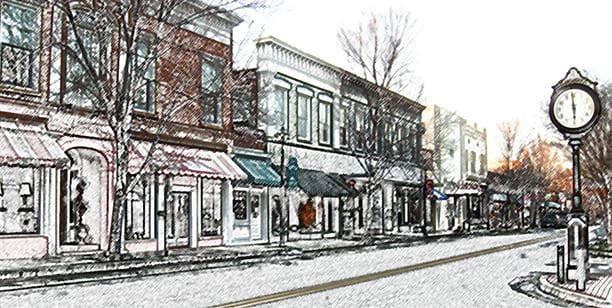 I make the distinction because it is important to keep this in mind when you embark upon economic development work. We don’t want to say yes to any company that will bring jobs or yes to anybody who will build a building. This leads to a depraved, disjointed community not to a successful one. We want to instead set out to develop and manifest a vision and reality where the citizens of York prosper and enjoy a high quality of life. Keeping this as a guiding principle will help us make good economic development decisions.

Successful economic development is intentional, long-scope, and done with much work in visioning, strategy, and leadership. We need to decide what we want to be, and then create it. We begin with the end in mind (as Stephen Covey would say), and then we work to create that end, being flexible to opportunities and luck along the way, for luck is when preparation meets opportunity, as they say.

So, the most important thing for successful economic development of a community is shared vision. Next, is community leadership. Any particular project (recruiting an employer, building a building, etc.) should follow under these two. Thus, this email. I see leadership developing among the community. And I see many positive things happening. I think it is time to pull the community together around a shared vision of what York will be in 10, 20, 35 years, and create a specific strategy to get us there.

Why Is Downtown So Important?

The revitalization of the downtown is not the only economic development strategy that should be at play, but it is definitely one of a very short list, and it should be first on the list. This is critical for leadership to understand. It’s tempting to see the downtown as small, not able to support a lot of jobs, and therefore not all that important for economic development, but that is an outdated and misguided perspective.

The fact is that the new economy centers around the cultural vibrancy of an urban district. The reason is that this cultural vibrancy is what recruits and retains talented, productive people; and talented, productive people are the drivers of the new economy. It doesn’t matter if your business has 1,000 employees or 1 employee; people is your #1 need. If there is cultural vibrancy in York (a vibrant engaging downtown), then talented people will move to and stay in York. If there is not, then they won’t. The situation is really that simple.

The key is to not only bolster the downtown’s revitalization, but to understand how that will, in turn, drive the city’s entire economy. This is why the downtown is at the center of the all-ships-rise economic progress of the city.

We have to reverse the tide and create an upward spiral, which of course works in the same way but moving upward as opposed to downward.

York is a segregated community. It is segregated by white and black, by wealthy and poor, and by other ways as well. We need to acknowledge this and not be afraid to address it. We need a vision that incorporates all of the citizens of York – a brighter future for everyone.

I often hear white people say “why does this have to be about race?” To them I say, look around you when you say that and see that there are only white people at the table. You don’t think it’s about race, but the people who are NOT represented at the table sure as heck do. So, we need to be cognizant of the fact that the very ability to “be at the table” (or provide input) is the real power issue at play.

But having said that, we need to make this initiative about economics and NOT about race. We need to make sure we are creating a positive future for the poor, the middle, and the wealthy, and that will include everyone, regardless of race. And as far as recruiting talented productive people to the community, that’s beyond race. That’s our new horizon.

One example is that while we may be offering incentives for developers/owners to upfit buildings and to start and grow businesses, we can also be offering training programs in soft skills and technical skills free of charge to anyone who wants to learn to be more employable (and thus wage-competitive). Therefore, we work at the top and the bottom and find innovative ways to make success meet in the middle. This makes it about economics, regardless of race or ethnicity or anything else. Such an approach is good for everybody (the top and the bottom).

This is just an example, of course, but I thought it important to address this issue directly.

We need to embrace and support the successes we are already having. We need to not be shy about addressing the problems and difficulties we face. And we need to develop a shared vision for the City of York. Then, we need to develop an economic development strategy that can get broad support among leadership and the community.

So, let’s gather and imagine the town we want to live in. Then, let’s get to work making it real.