Unemployment is high across the nation. A jobless recovery is not sustainable. People have to work. Unemployment in Rock Hill is 20 Percent. That’s one in five. It’s more than double the national average. Is that sustainable? I would think that 20% unemployment would cause some kind of local economic crash or correction.

I’ve read the stories that tell me of the historic hey-day of Mr. Anderson’s Rock Hill Buggy Company – a history of black and white photos, Ken-Burnsian voiceovers, and soot. I’ve learned about the company closing and the next behemoth to bring jobs – the bleachery. I’ve learned about textiles and blue collar prosperity taking us into the 80’s. Then, I heard about the Charlotte Metrolina emergence – the point at which we became a spoke in the greater Charlotte Marketplace.

Then… I came back here, and I learned of a different place. I learned about super-regions and corporate relocation endeavors, but they seemed academic and distant from the real energy about the place. I learned that the roof had come off of downtown. (Not figuratively, but literally.) So, I followed that energy. I was intrigued and have become invested.

Rock Hill is a town with a consistently growing population and with consistently high rankings in national studies for quality of life. Rock Hill is a town experiencing well-paced and quality growth and development. Yet, one in five working adults here cannot find employment. So, what gives? How the growth and high-quality of life alongside the soaring unemployment? Can that last? And what can we do about it?

“The most important contribution management needs to make in the 21st century is to increase the productivity of knowledge work and knowledge workers. It is on their productivity, above all, that the future prosperity — and indeed the future survival — of the developed economies will increasingly depend.” – Peter F. Drucker

The new worker is a knowledge worker. The new jobs are facilitation, management, and organization. The new assembly line is information and processes and communications. The workplace is knowledge-based. The tools are malleable processes and technologies. The tools are, more often than not, seen through a digital interface, and the method of exchange and connection is through the internet and mobile networks.

The model of the contracted worker and the flatter marketplace is all over the map. We are seeing it everywhere. Think of financial professionals who have been laid-off or quit their jobs to open up their own shops. Think of the health care professionals who are essentially independent contractors. No longer does an organization hire a janitor for 30 years, but instead contracts a team of cleaning professionals.

Today’s marketplace is a flatter marketplace – with more contracting and team management. The creative economy and the technology sector in particular are growing because they constitute the support sector for the growth and change of every other industry. For health care to grow, for professional services to grow, they are looking at how to use technology effectively, to manage processes more effectively, to innovate and to create.

In RevenFlo’s model, for example, we provide web teams to organizations of all sizes all across the nation. The core of our business is strategy and project management. The next layer is talent with niche skills: designers, developers, writers, videographers, SEO managers, and more. When we bring in revenue, we essentially are bringing in contracted work. It’s just like in the housing market. When someone is hired to build a house, that is work for the builder, the project managers, the carpenters, the electricians, the plumbers, the masons, and so on. Yet, the construction/housing market is bust, and the technology and creative marketplaces are growing.

As we identify the mega-regions of the world that attract the world’s creative talent, we find concentration of knowledge-based entrepreneurship and flatter, more contract-driven marketplaces. We find individuals who are driven more by creativity, openness, and passion than by market pressures.

As we look at the regional cities who retain and attract youth and talent – Charleston, Chapel Hill, Asheville, Wilmington, and even Greenville (SC) – we see that these places have lots going on. They are fun, exciting places to be. And it is often the artists and the musicians and the entrepreneurs of artistic endeavor who create the energy that other youthful people want to be around. Thus, from that atmosphere of youth and openness and experimentation arises the entrepreneur – from the cauldron of talent, and innovation, and youth.

Young entrepreneurs want to be near other young entrepreneurs. They want to go out and interact. They want places with lots of live music, with lots of different restaurants and bars, with art galleries, and with all kinds of opportunities to interact with youthful and artistic energy. Cities with energy and bohemianism serve to recruit, retain, and development creative talent.

Rock Hill, at least from my point of view while growing up here, seemed to be missing the youth generation. It seemed like there was this idea that leaving Rock Hill after high school was better and more associated with achievement and staying in Rock Hill was worse somehow and more associated with lack of achievement. This is partially part of the teenage phenomenon, of course, but this psychology was reinforced for me around family, friends, and acquaintances – even out in the general public it seemed. And when I started going to high school in Charlotte, it was as if they were aware of it too. “Rock Hill sucks” was widely agreed upon by the youth and a more sophisticated, less vulgar version of the same idea reinforced by the parents.

But Rock Hill did suck for youth. There was nothing to do really, or at least not much to do. So, college students left on the weekends, and when they graduated, they took off never to return. Therefore, few bars and restaurants and live music and events were able to ever get started because there wasn’t the population here to support it. And therefore, the leaving continued. And few people moved to Rock Hill after graduating from other regional colleges because there was no young singles scene. And thus, again, few bars and restaurants and businesses. A self-perpetuating cycle.

Yet, something has sparked a change here in this place. Many don’t yet see it. But there are more arts, culture, and music related activities boiling in Old Town than there have ever been in Rock Hill – from my experience. There is energy here, and youth and bohemianism.

There has been a punk scene in Rock Hill for 30 years. In the past, the scene has been thin and mostly supplying the Carolinas with its bands, as opposed to being a growing scene here in Rock Hill. Yet, the scene is different today. It has never been bigger and more energized than it is today – with more bands, more friends, and more regular venues than ever before.

So what is Punk Rock?

The Punk Rock of the 70’s was born out of anarchy and destruction. Like the hippy movement before it, and like Rock’n’Roll, it was born from youth and rebellion. We saw some who embraced the music, some the fashion, some the aggressiveness, some the reckless abandon of it all, and some the political consciousness of an a-political movement.

Yet, some saw an opportunity to just do it yourself. An openness and entrepreneurship of sorts.

I didn’t grow up in the 70’s. I was born in ’76, and the punk I knew was different. The dominant principles of the punk I knew were not destruction and nihilism, but productiveness and independence – to do it yourself… outside of the manufactured mainstream.

The punk I knew is now being called American Hardcore. It was a new generation’s take on rebellion and organization. It was still anti-mainstream. But it was suburban mostly. It was still loud and youthful and rebellious. But it was less about tearing down the institutions and more about building up an alternative.

The scene continued to evolve and, by the time of the early 90’s punk scene which is the one that I participated in pretty heavily, the scene wasn’t driven by anger at all (at least not from my point of view). There was a very present political and social consciousness, but it was mostly driven by creativity, organization, and entrepreneurship. It was driven by a “just-do-it” and “do-it-yourself” mentality.

We young punkers were entrepreneurs, and many of the band members that I knew from the Carolinas Hardcore scene of the early 90’s are now owners and key staff in entrepreneurial businesses.

These individuals want to control their lives, and are not driven primarily by money. Money’s important, of course, but not more important than controlling your time and finding meaning in what you do. These people have not changed; they are just supporting their families now, and they are playing more significant roles in the organizations that affect our lives.

You will find the Punk Rock or DIY spirit very present in new creative professionals and in the way they choose to do business. These professionals are attracted to and thrive in compelling, youthful, bohemian environments.

We have energy in this place. We have a vibrant punk scene, an arts scene, knowledge workers, technology and creative companies, and momentum. The most promising path out of 20% unemployment is not praying for the next behemoth, but the organic growth of the creative/technology community. Tomorrow’s economy is a services economy, a creative economy, and an innovative economy. Talent, as well as businesses, will be attracted by openness and creativity and grown through entrepreneurship. Tomorrow’s economy is a DIY Economy. 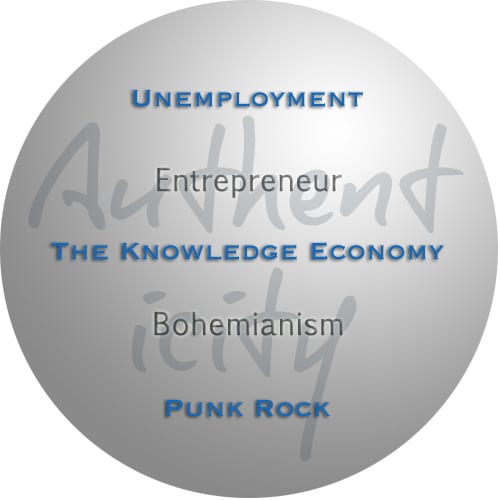